Mike Sponza – “Made in the Sixties”

“Made In The Sixties” is a retrospective with a difference. Aside from shoehorning in a wide range of music and themes into the blues genre, Italian guitarist and songwriter Mike Sponza has cleverly approached the overarching 60′s concept in a dichotomous manner that focuses as much on the downside as well as the swinging side.

He sets himself the difficult task of writing material that both emulates the songs of the time, while bringing fresh meaning to his parent’s era.

He triumphs with a bit to spare. The songs are solid, the lyrics are by turns humorous, insightful and at times ironic, while the music is diverse, but remains coherent to the task in hand.

The guest singers also make their mark, and by the time of the big band blues style finale of ‘1969 Blues For The Sixties’, you really do feel as if you’ve been immersed in a special era.

Guests such as Pete Brown and Dana Gillespie are effectively source material, while the producer Rob Cass is a house producer at Abbey Road and is the perfect conduit between Sponza’s musical ambition and the studio that can make his dreams come true. You can join the dots yourself and work out the connections.

Sponza researched the era and came up with the clever idea of prefacing each song with a particular year and theme, to which he ascribes a subtle musical feel, offset by plenty of musical contrast.

‘Made In The Sixties’ is the sum of its meticulous parts which include a musical tableaux that stretches from blues into funk, gospel, fusion, soul and Latino genres.

Sponza’s array of different guitar tones – check out the wah-wah solo on the closing ‘1969 Blues For The Sixties’ – hover above intricate percussion and layered keyboards, which all contribute to a colourful musical landscape.

Sometimes the music evokes the lyrical feel as on the ethereal sounds of ‘Glamour Puss’, while the faux soul of ’1961 Cold Cold Cold’ cleverly distils the dichotomous nature of the project.

The music is redolent of the times, while the lyrics intriguingly dip into vivid imagery, both real and imagined: “The Orient Express had left while Brubeck was Taking 5.”

Brown’s vocals have improved immeasurably in the last few years and his almost bug eyed approach to his phrasing perfectly delivers traces of irony in lines such as: “We didn’t even know in those far off days, Just how close it came to cancel out this decade.”

There’s almost a honky-tonk feel to the Nathan James (Inglorious) sung ‘1963 Day Of The Assassin’, with additional slide from Sponza and piano from Michele Bonivento , while ‘1964 Glamour Puss’ sparkles with an ethereal sound and very 60’s theremin style riff.

And just when you think Sponza has made his defining musical statement, he surprises us with a gospel inflected Eddi Reader sung ’1965 Even Dylan Was Turning Electric’, on which he adds some Dobro to a song about one of the musical defining moments of the 60’s.

It’s his use of subtle musical and factual contrast that lies at the core of an interesting album. What initially didn’t look a particularly original project has some unexpected substance and depth.

‘1966 Spanish Child flows mellifluously on the back of some lilting funk, and benefits from Sponza’s ascending guitar break over feverish percussion. But it’s the sudden jolt into an insistent funky fusion piece ’1968 Just The Beginning’ that gives the album a belated and unexpected lift.

The rhythm section of drummer Moreno Buttinar and bassist Roby Maffioli lock into a deep groove and give Rob Cass the perfect framework for a fine vocal, before the track slips into a superb Michele Bonivento synth solo.

With everything bubbling up nicely, it simply remains for Sponza to bookend the project with a horn-led big band blues finale called ‘1969 Blues For the Sixties’, which nicely rounds off an excellent album well worthy of your purchase.  **** 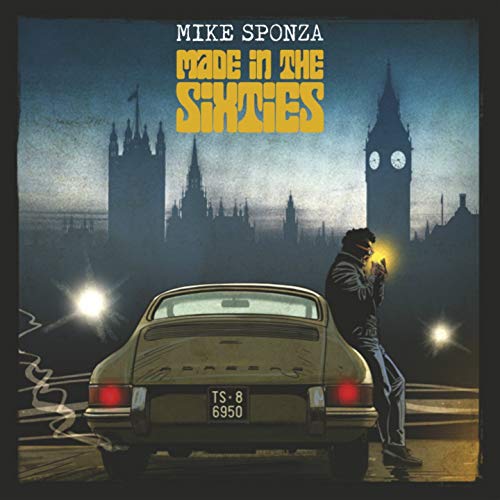 I’ve been a huge fan of the Jack Bruce/Pete Brown axis since their Cream days and through their legendary dozen Bruce solo albums from Songs for a Tailor (1969) to Silver Rails (2014) Alongside this Pete Brown has an impressive series of solo albums with The Battered Ornaments, Piblokto & especially Phil Ryan.

Pete Brown has also done 25 or so collaborative projects with the likes of Colosseum, The Hollies and various continental blues guitarists. This excellent album is a collaboration with the Italian blues guitarist Mike Sponza. Recorded at Abbey Road with producer Rob Cass ( like Silver Rails) this is a great collection of new Pete Brown lyrics about life in the 1960s. One track is dedicated to each year of the decade and picks a theme – 1963 Kennedy’s assassination, 1965 Dylan going electric, 1969 the UK blues boom etc. This gives the album a real continuity of concept that puts it above many of this year’s new releases.

Pete Brown sings one track, as does Eddie Reader, but this is not a starry album, just great collective music. Sponza is a very tasteful guitarist and musician. And its very welcome to see Pete Brown still working at 77, and still at the top of his, very considerable game. If you liked last years Procul Harem album with Pete Brown, you’ll love this. A very welcome surprise and well worth tracking down this Italian CD.